Why is this proven FAKE still in biology text books? 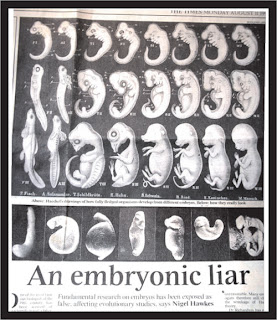 “What he (Haeckel) did was to take a human embryo and copy it, pretending that the salamander and the pig and all the others looked the same at the same stage of development. They don’t. They are fakes” Dr Michael Richardson, St George’s Hospital Medical School, London. The Times (London, UK) 11 Aug 1997, p14

What does it matter you might ask? Well its great news! you’re not just like the animals for a start! Nor is the child carried in the womb just another animal or blob of tissue.

But still, you might ask, what does this matter? Imagine this: It's World War Two. A Nazi German officer has a gun pointed at your head. He wants you to get into a bulldozer and drive it forward. In front of the bulldozer is a pit in which there are 300 Jews who have just been shot. Some of them are still alive. He wants you to bury them alive! If you don't do what he says, he is going to shoot you and do it himself. Would you drive it forward? Probably not, because you value human life. How then do you feel about abortion? Perhaps you don't think it's a human-being in the womb? Adolf Hitler convinced a nation Jews weren't human– so that he could justify murdering them.

It is of EVERY importance that you realise that the child in the womb is NOT what the text books would have you believe. Such things fuel an unseen holocaust! For example: a staggering 3,900,000 abortions have occurred from 1990-2000 in the UK alone. (source http://www.bma.org.uk) In the USA,1973 - 2008, nearly 50,000,000 legal abortions have occurred. (AGI) Your conscience tells you it is wrong to murder. At just six weeks, the baby has hands, eyes, and a beating heart. So with these thoughts in mind, complete this sentence: "It's okay to kill a baby in the womb, when . . ."

Did you know that God considers hatred to be murder? (How much more will He condemn those who actually take the life of another?). Here are some more questions: How many lies have you told in your life? have you ever stolen anything? or used God's name in vain? Jesus said, "Whoever looks at a woman to lust for her has already committed adultery with her in his heart." Have you looked with lust? Will you be guilty on Judgment Day? If you have done those things, God sees you as a lying, thieving, blasphemous adulterer-at-heart. The Bible warns that if you are guilty you will end up in Hell. But God, who the Bible says is "rich in mercy," sent His Son (who lived a perfect life) to suffer and die on the cross for those who will turn to Him. We broke God's Laws, but Jesus offers to pay our fine as a free gift (no good works will bribe a good judge). That means He can legally dismiss our case. "For God so loved the world that He gave His only begotten Son, that whoever believes in Him should not perish but have everlasting life." Then Jesus rose from the dead and defeated death. With a heart of love for your soul, I plead with you: “as though God were pleading through us: we implore you on Christ’s behalf, be reconciled to God.” You were created for greater purposes than animals! Your life has meaning and purpose! You were “fearfully and wonderfully made”: God actually knit you together in the womb ( see Psalm 139:13). Please, repent (turn from a lifestyle of disobedience) today, trust in Christ’s finished work on the cross, and God will forgive your every sin and grant everlasting life in heaven to all who trust in Jesus. Then read your Bible daily and obey it.
For more information on abortion visit www.tinyhope.co.uk
For a FREE Bible / more info: realanswers@hotmail.co.uk, +44 (0)843 2894 765 FREE Gospel tract.

some of the text books that still contain this hoax:

Cecie Starr and Ralph Taggart, Biology: The Unity and Diversity of Life (Wadsworth, 2004, draft version presented to the Texas State Board of Education in 2003), pg. 315:

Joseph Raver, Biology: Patterns and Processes of Life (J.M.Lebel, 2004, draft version presented to the Texas State Board of Education for approval in 2003), pg. 100:

Posted by ARedeemedVoice at 08:08 3 comments: